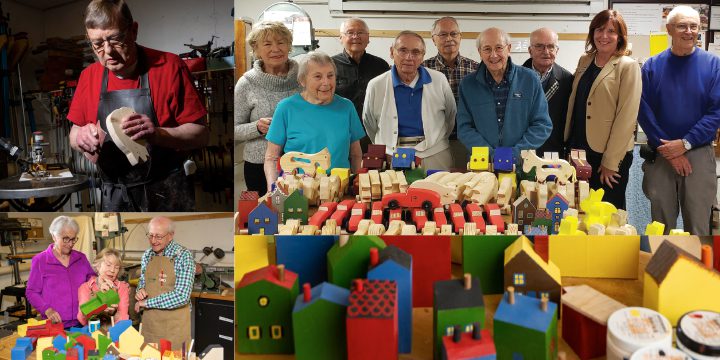 A visit to the woodworking shop at Edgewood Retirement Community in North Andover, Massachusetts, might make you think you’ve stumbled upon one of Santa’s secret workshops. From the beginning of winter through the end of summer, you’ll find a small-but-dedicated crew of twelve talented people busily designing, shaping, sanding, painting, and attaching wheels to a variety of wooden toys. But they aren’t elves; they’re Edgewood residents who are part of the “Edgewooders” woodworking club. And they have one goal in mind: to make children smile.

Most of the toys the Edgewooders create will be donated to children being helped by Lazarus House Ministries — a local organization that provides food, clothing, and shelter to people struggling with poverty. This is the second year Edgewooders have donated toys to Lazarus House and, thanks to this group of industrious residents, they’re doubling the number of toys given last year.

According to Ed Martin, an Edgewooder who heads up the toymaking project, “Edgewood residents design the toys and draft the plans, and we change several of the designs each year. It’s a great thing to do. It’s easy and fun, and the children get a lot of benefit from it.”

The few toys that aren’t donated are sold at Edgewood’s annual craft fair along with other household items the group makes including napkin holders, cutting boards, and toast tongs. Edgewooders then use the proceeds from this sale to purchase the non-toxic, water-based paint, glue, and wheels used for the toys. Adding to the effort is Turnkey Lumber Corporation, a New England manufacturer of prefabricated building components. Turnkey keeps the Edgewood toymakers supplied with scraps of Southern pine, a strong, dense wood that’s perfect for making toys.

The Edgewooders also use their woodworking skills to help their fellow residents throughout the year. “We have a repair shop,” says Martin, “where we repair residents’ furniture and other wooden items. And we do special projects. We’re currently making some new shelves for Edgewood’s library.”

And now, as winter’s chill sets in, the Edgewooders will soon be getting back to work designing, shaping, sanding, painting, and fitting wheels for next year’s toy donation with joyful visions of even more smiling children.

Edgewood is the Merrimack Valley’s only LifeCare community and home to a diverse group of people who are fully engaged in life and actively pursuing their own interests while also learning from each other. To learn more or schedule a personal tour, call 978-725-3300.